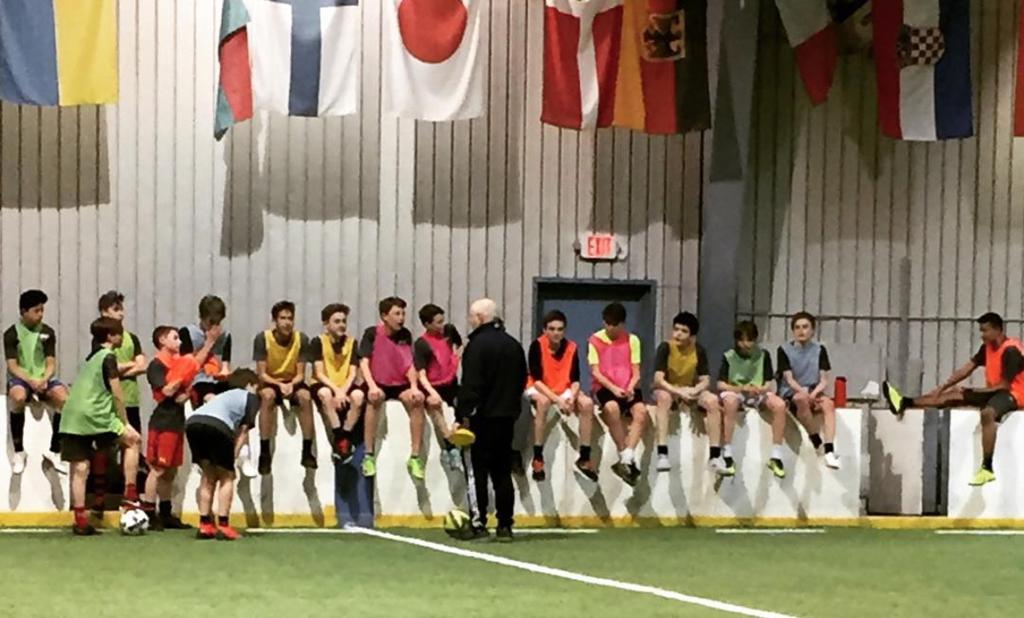 Dennis Weyn has been Ohio Premier’s director of coaching since its inception in 1988. He was a member of the U16-18 Dutch National Team and played professionally in the Netherlands. As the Hathaway Brown varsity girls head soccer coach, Dennis led the Blazers to five Final Four appearances, one State Runner up finish, and three State of Ohio Championships. He was awarded the 2004 National Federation of High Schools State Coach of the Year and the Plain Dealer Coach of the Year. Weyn is the former director of Cleveland Force soccer camps and former assistant coach at Virginia Commonwealth University in Richmond, Virginia. Born and raised in Dublin, Paul Eyre played youth soccer in Ireland. In the United States, he played Division 1 soccer at the college level. He is widely regarded for his unique soccer training methods with an emphasis on individual development. Coach Eyre sat on the Board of the Major Indoor Soccer League (MISL) and he was a close advisor to MISL Commissioner Steve Ryan for 15 years. Locally, he has coached youth soccer for 35 years and was the Varsity Boys' Coach at Cleveland Heights High. Currently, Paul serves the same school as the Varsity Girls' coach. Players who learned the game with Coach Paul have played professionally in the MISL and the MLS as well as many of the country's finest universities.  Paul is a dedicated and passionate coach whose philosophy is simple-- to provide the best possible opportunities for youth to learn and love the game of soccer.

A native of Reading, England, he has played in the United Kingdom, France, Poland, Romania, New Zealand, China and the United States. At the youth level, he was invited to be part of the professional academies of FC Racing Colmar (France) and the TS Wisla Krakow (Poland). He’s had the opportunity to learn the game from former professional players and coaches representing clubs such as Boca Juniors, Reading FC, Manchester United, New England Revolution and the Columbus Crew.

Scott has a BA from Lafayette College and MA from Lehigh University. He works for CSA Group developing North American standards and regulations to help mitigate global climate change. Scott is a huge supporter of Southampton FC!

As a boy, Tshepo started playing soccer in the open fields and streets of Soweto, South Africa. He was selected to play for Chappies Little League, a premier youth club in Johannesburg, South Africa. Then proceeded to play for Orlando Pirates reserve and was promoted to the professional team. As a college student in Vermont, he coached a women’s soccer league and youth club soccer. He then became the assistant coach at St. Michael’s college in Vermont. After moving to Cleveland, Tshepo coached the boys of Avon Lake Premier Soccer Club and Cleveland Select Soccer Club. Since 2008, Eastside Kickers Soccer Club players have called him coach and in 2014, Tshepo began as Head Coach of Cleveland Heights High Boys soccer team. Tshepo has been with OPFC since its inception in 2015. He has a D License from the United States Soccer Federation. Tshepo also has a master's degree in engineering from CASE.

Part of two Division II state championship teams while a high school player at Hathaway Brown. Her coach was none other than Dennis Weyn, OPFC's director of coaching. Attended the University of Cincinnati on a soccer scholarship and lettered after appearing in 13 matches as a freshman before a career-ending injury. She became a student assistant coach her sophomore year at UC. Coached at Cleveland Heights High School and is now the head coach at Beaumont High School.

Joseph grew up in Solon, Ohio and now lives in Cleveland Heights. He has been coaching soccer locally for the past seven years and is currently the head coach of the boys’ soccer team at Villa
Angela-St. Josephs. He has also coached for Force Sports, America SCORES, Royal Academy Soccer, and SELSC. He holds a B.S. in Integrated Social Studies Education (7-12) from Ohio University.
When Joseph is not coaching soccer, he is probably watching it, reading about it, or playing it. He plays on three adult league teams and organizes an adult pickup group that consists of over 500 members that plays on Saturday and Sunday mornings at St. Ignatius. He does not have a strict style of play as he has coached in many different environments with players of many different backgrounds. This has caused him to adapt his approach to each situation rather than trying to instill a style of play that his players are not capable of. The one unifying idea he attempts to instill in all his teams is a sense of solidarity and a positive culture.

Patrick Gleba joined OPFC in the fall of 2016. As a high school player, Pat played for Brush High School in South Euclid, OH and then continued playing for Kent State’s club team. He has been the Cleveland Heights High School coach since 2015, first as the assistant of the boys varsity soccer team, and for the past two years as the head coach of the varsity girls team.  Prior to that, Pat spent five years at Andrews Osborne Academy as an assistant coach.  Coach Gleba has an undergradate degree from Kent State University in American Sign Language and Education K-12 and a graduate degree in Coaching Education from Ohio University.  He has been teaching American Sign Language at Cleveland Heights High School for the past 12 years.

Taylor Pickens has been playing soccer since she was 8 years old and developed her love for the game through The Eastside Kickers. She would move on to continue her career with the Cleveland Cobras and win a state title. Taylor was a 4-year varsity starter at Cleveland Heights High School, where she was named LEL player of the year her Junior(2006) and Senior(2007) years. Taylor went on to play at Youngstown State University where she finished her soccer career. Taylor has coached with the East Side Kickers, served as the Varsity Coach for Euclid High school for the 2016 and 2017 season, served as Cleveland Heights Junior Varsity Women’s soccer coach for the 2015 season and Varisty Coach for the 2018 season. She currently is the Head Women’s Soccer Coach at Painesville Harvey High School. Taylor holds a Bachelor’s degree in Criminal Justice and a Masters of Education.

Samantha started her coaching career at the age of 16, helping teach summer camps on the West side of Cleveland while she was still in high school. After graduating, Sam continued in the sport, choosing to play at the Division I level at Lafayette College in Easton, PA. While in the program, Sam received several academic and athletic awards and was eventually named senior captain. Since moving back to her hometown of Avon Lake, she has continued to pursue her passion for the sport. In the Spring of 2020 Sam was named the assistant coach for the varsity men’s soccer team at Shaker Heights High School. A former OP member herself, she is excited to share her experience with a group of talented young players as she continues to grow as a coach.

Raleigh T. Guice, Jr. has been playing soccer since the age of 6 and developed within the Forest Park Rangers and Internationals Soccer Club as a youth, competing for 2 national titles at the U16 and U19 levels in the late 80’s/early 90’s.

Raleigh was a 4-year Varsity Starter at Shaker Heights High School, where he was named all Lake Erie League 1st team 4 times, all Greater Cleveland Honorable Mention as a Freshman and all Greater Cleveland 1st team 3 times. He was named Honorable Mention All-Ohio as a Senior and was the starting Goalkeeper in the East vs West Senior Bowl All-Star Game, at Krenzler Field. Raleigh went on to play Division III soccer at The College of Wooster. He helped lead the Shaker Raiders to 3 Lake Erie League Championships and 1 runner up finish, in his 4 years as a varsity starter. Raleigh became a player-coach in graduate school at Kent State University, for Kent’s Club Team.

Raleigh holds US Soccer National F, E and D licenses and is pursuing his US Soccer National C License. Raleigh was trained at Soccer Plus Goalkeeper School by Tony DiCicco, who was instrumental in building Raleigh’s goalkeeping and coaching style, over the years.

As Head Coach, his U10 Girls Team had a division winning, undefeated season, in the Ohio Travel League.

Soccer has long been a core part of Coach Chibuzor’s life.  Playing since he was six years old, Chibuzor was inspired by his older brother who played professionally in Nigeria.  Chibuzor studied the sport and his brother’s style of play, adding his own skills of attack and footwork making him a stand out striker. He played for a state league and was even invited to the Nigerian National U-17 Camp, before leaving overseas to pursue his career.

Coach Chibuzor had the opportunity to play for several professional leagues including two seasons in Laos, one season in Singapore, one season in Australia, and four seasons in Cambodia. Chibuzor began coaching when he lived in Cambodia working with a youth soccer program outside of Phnom Penh.  He also focused on volunteerism, working at orphanages in remote villages to expose children to soccer. After moving to the United States with his wife and two boys, he has continued to coach young athletes in his capacity as Assistant Coach at Cleveland Heights High School. Chibuzor prides himself on connecting with his players, seeing their potential and then developing programs to help build their skills and confidence.

In addition to playing soccer, Chibuzor has also worked as a personal trainer for clients with a range of fitness goals for over 5 years. He’s built specialized programs for soccer players, marathon runners, triathletes, and anyone trying to improve their general health.

For general information, please contact us at: opfcinfo@gmail.com Please also feel free to reach out to the manager of your player's age group with any specific questions you might have or anyone listed below.